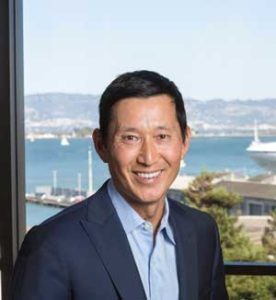 Dr. Kim specializes in cosmetic and reconstructive surgery of the face, head, and neck, with his office in the beautiful North Embarcadero area of San Francisco. His services range from major facial plastic surgery operations and laser procedures leading to dramatic improvements in appearance to non-surgical, rejuvenating office procedures with little to no down time.

He has produced over 50 papers, articles and chapters in the medical literature, and taught at over 50 conferences throughout the world. He has been course director for some of the largest facial plastic surgery meetings in the world. In addition, Dr. Kim has an extensive research background and is currently conducting several studies that aim to objectively test current methods used in facial plastic surgery and to find objective, patient-based outcome measures for plastic and reconstructive procedures.

Dr. Kim is considered to be one of the top rhinoplasty surgeons in the world. Having authored over 50 articles and chapters, presented hundreds of lectures, and completed several scientific studies—all on the topic of rhinoplasty–Dr. Kim is viewed by those in his field as an expert and a leader in this surgery.

A highly sought after speaker, Dr. Kim has led or served as faculty for numerous rhinoplasty courses both nationally and internationally. He is known as the “expert’s expert”, and frequently receives referrals from other medical professionals to provide opinions or treatments for particularly complicated cases.

Because rhinoplasty is such a complex and nuanced operation, having a surgeon as experienced and skilled as Dr. Kim makes a significant difference in achieving the most optimal result possible and minimizes risk of complication or revision.

Dr. Kim is widely regarded as the San Francisco Bay Area’s Best All Around facial plastic surgeons and a world leader in rhinoplasty.

David W. Kim, MD received his B.A. in human biology at Stanford University and his M.D. and surgical residency training in Otolaryngology – Head and Neck Surgery at the University of California, San Diego Medical School. He completed his specialty training with a fellowship in Facial Plastic and Reconstructive Surgery at the University of Illinois at Chicago. While in Chicago he trained with world-renowned facial plastic surgeons Dean Toriumi, M.D, J. Regan Thomas, M.D., and M. Eugene Tardy, M.D. and nasal reconstruction surgeon Gary Burget, M.D.

In 2003, Dr. Kim was appointed as Chief of the Division of Facial Plastic and Reconstructive Surgery in the Department of Otolaryngology – Head and Neck Surgery at the University of California, San Francisco, where he served until 2009.

David W. Kim, MD, was the principal investigator of the first ever multi-center, prospective quality of life study investigating the effectiveness of functional rhinoplasty for nasal obstruction. This study showed for the first time that rhinoplasty (in addition to traditional breathing operations such as septoplasty) can lead to significant breathing improvements and quality of life enhancement in patients. Considered a landmark study, Dr. Kim was awarded the prestigious AAFPRS Investigator Development Grant to support this research.

Dr. Kim is a member of the board of directors for the American Academy of Facial Plastic and Reconstructive Surgery. He currently serves as Western Region Director for the AAFPRS, the largest organization of facial plastic surgeons in the world. He has held numerous leadership positions in facial plastic surgery on a national level and remains actively involved as a speaker in national and international courses and meetings.

For my first time having surgery I had a wonderful experience. The staff is caring and knowledgeable.

Thank you for the way your staff worked together to make the experience comfortable and relaxing. The efficient yet friendly atmosphere promotes confidence and a sense of ease. Thanks!

I felt in good hands the whole time.

Stellar! Everybody was so helpful, friendly, and professional. Great facility. It was a really pleasant experience. Thank you! Everyone was warm , friendly, and informative.

Amazing experience. We could not have imagined more wonderful nurses, and the anesthesiologist was fantastic. Thank you to the reception staff for being so caring, thoughtful, and welcoming.