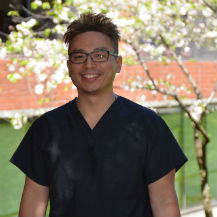 Mang Chen, MD, is a reconstructive urologist who specializes in genitourinary surgeries for transmasculine individuals. He graduated magna cum laude from UC San Diego and was elected into the Phi Beta Kappa honor society. He obtained his medical degree from the University of Pittsburgh, School of Medicine, where he was awarded the Behan Prize in surgery, and remained in Pittsburgh for his general surgery and urology training. He subsequently completed a fellowship in urologic trauma and reconstruction and returned to Pittsburgh thereafter, joining the faculty as an assistant professor of reconstructive urology. After 3 years in Pittsburgh, he returned home to California to perform genitourinary surgeries, including phalloplasty (performed with microsurgeon), metoidioplasty, glansplasty, monsplasty, scrotoplasty, urethroplasty, fistula repair, testicular and penile implants, phallus reconstruction, scrotal reconstruction and related surgeries.

For my first time having surgery I had a wonderful experience. The staff is caring and knowledgeable.

Thank you for the way your staff worked together to make the experience comfortable and relaxing. The efficient yet friendly atmosphere promotes confidence and a sense of ease. Thanks!

I felt in good hands the whole time.

Stellar! Everybody was so helpful, friendly, and professional. Great facility. It was a really pleasant experience. Thank you! Everyone was warm , friendly, and informative.

Amazing experience. We could not have imagined more wonderful nurses, and the anesthesiologist was fantastic. Thank you to the reception staff for being so caring, thoughtful, and welcoming.